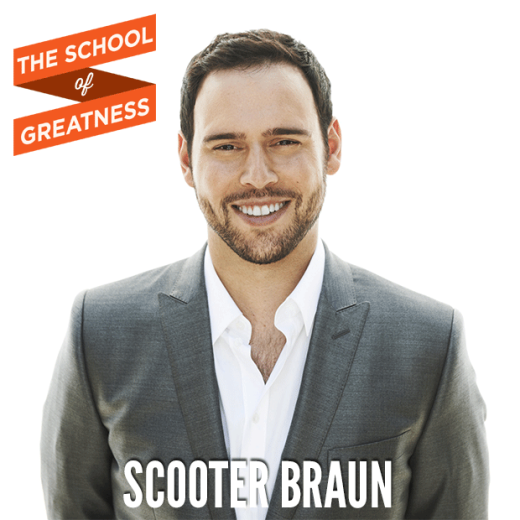 Be selfish about your dreams

If you haven’t heard Scooter Braun’s work, well, actually, you have. You just haven’t realized it yet. The iconic music industry manager is responsible for some of the biggest acts of the past decade, including Ariana Grande and Psy, but he first exploded onto the scene by discovering Justin Bieber. Today, his record label has grown to produce TV shows like Scorpion and movies like The Giver, with more projects always in the works. There’s no doubt his success story is of epic proportions.

But as jealousy inducing as his Instagram account truly is, his road to success was has been as bumpy as anyone’s. Scooter drove that point home recently in an interview with Lewis Howes, who sits on the board of Pencils of Promise with him. He opened up about the highs and lows that led him to becoming one of the most influential people. Here are the most inspiring take-aways from his journey:

1. People won’t remember your failures, but you will

Scooter says people are always telling him that every single artist he manages seems to become a sensation, but it wasn’t always that way. When he became the VP of marketing for a new Atlanta record label called So So Def at age 20, he didn’t have all the answers yet. “I had a lot of failure before Asher Roth happened,” Scooter says, referring to his first successful artist. But he doesn’t regret the experience at all, citing that he “learned a lot from that experience because I failed.”

2. If you know what you want but are afraid to go for it, put your own back against the wall

Before Scooter entered the music business full-time, he was a party promoter. He was a really good party promoter, I might add. But with his dream to pursue a career in the music industry calling to him, he decided to leave it behind to start his own label. He had “everything to lose,” but instead of continuing to take the easy route he actually forced himself to stop using parties as a financial crutch.

This isn’t to say that Scooter would have been left with no options had things not worked out. He simply wanted to prove to himself that he could pursue his passion on merit and hard work alone.

He gave himself a year to make it on his own before his savings dried up, and within four months he had found Asher Roth and Justin Bieber. The power of putting it all on the line, ladies and gentlemen.

3. Believe in your dream until you can’t anymore

Today, no one questions Scooter’s acumen. But before Justin became a household name, it was a different story. There’s a reason Scooter left So So Def, determined to find artists he connected with move marketing online. It’s because people doubted him. Yet when Lewis Howes asks Scooter if he ever thought that Asher Roth or Justin Bieber wouldn’t succeed, his answer is a steadfast, “No. I really believed in both of them.” It’s what allowed him to put all he had into these artists, and it’s what ultimately made him successful.

4. Your failures will teach you to appreciate your blessings

Another benefit of going through difficult times? When the tide turns in your favor you won’t take it for granted. Scooter says going through tough financial times as he built his label helped him “respect everything so much more. And it also reminds you when you get money that tomorrow isn’t promised. And you value everything.”

5. Build trust above all

The “Atlanta hustle” as Scooter terms it, taught him an extremely valuable lesson. “Your word is all you have.” When you’re in hustling mode, working hard to pursue your passions, remember that building trust is so essential to your journey. It will help you build your strongest allies and advocates, and they will be invaluable.

As much as failure is an important part of your own personal development, when you reach the point of managing others you’re going to have to let them fail, too. This was hard for Scooter, who built his company alone for many years. But in retrospect, he believes “the only way to scale is to delegate and empower others… They’re not going to do it exactly like me, but they’re going to do it exactly like them.”

Beyond that, you have to empower people to pursue unlikely ideas, too. Just like many took a chance on Scooter before he had proved himself, he tries to take chances on his team members when they want to try something new.

7. The worst that can happen is you start again

“Be selfish about your dreams,” Scooter advises, especially while you are only responsible for yourself. Take this time to set yourself up for happiness and to build a foundation for the rest of your life. The great thing about the “risk” of pursuing your passions is that the worst that can happen is you fail and start over again the next day.

5 Tips to Handle Mistakes Gracefully in the Workplace