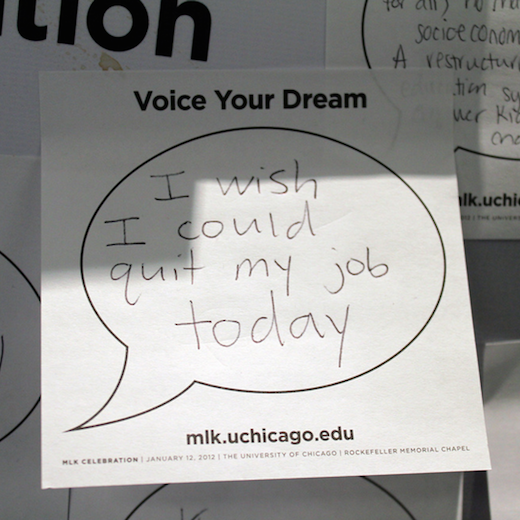 Why Quitting Is Sometimes The Best Thing You Can Do

Why is not quitting something you hate considered a good thing?

Quitting things in  your life (and yes, sometimes this means your job) is often an important step to a grey life. That’s why we love this post by Hannah Olsen from the CreativeLive blog that explains why quitting is sometimes the best thing you can do. Check it out:

CreativeLive CEO Chase Jarvis will quickly tell you: He’s a great quitter.  He’s quit all kinds of things, from various sports to med school. And you know what? It’s been the key to his success.

“I was pursuing a graduate degree in the philosophy of art before I quit to pursue photography full time,” Chase wrote on his blog in 2012. “Quitting was the result of a waning interest in learning about dead white guys — and it was a good move for me in the long run.”

Being a quitter is usually painted as a negative attribute; in school, in work, in life, “not giving up” is considered a prized skill. You’re supposed to hammer away at something tirelessly and sometimes fruitlessly, until something comes of it. And if nothing ever comes of it and you’re miserable the whole time? Well, chalk it up to experience and pat yourself on the back for living a life of dogged commitment.

Commitment? To what? To your own unhappiness? Why is not quitting something you hate considered a good thing?

In Chase’s case, quitting the things that made him unhappy or unfulfilled freed up his time to let him figure out what it was that would actually let him live the life he wants. And he’s certainly not the only one to do it. Singer/songwriter Shelby Earl, who quit a successful career to pursue music full-time, says it hit her one day that not quitting wasn’t doing her any favors.

“The big revelatory moment happened one day when I was sitting at my desk, miserable, staring at a spreadsheet, perplexed as to how my life had come to look like this, and I suddenly realized no one was making me be there,” Shelby says. “No one was making me live the life I was living. And if I wanted, I could just change it.”

But Shelby says that wasn’t the case at all.

“It wasn’t that my job was too hard or that I wanted to give up, it was that I realized I could live a much bigger, more meaningful life than I was currently living.”

According to at least one study, our collective societal finger-wagging about quitting might actually be physically bad for us. In a paper published in 2007, researchers found that those who were unable to step away from hard-to-reach or unsatisfying goals produced proteins that have been linked to real maladies, like diabetes. But beyond the potential for making ourselves sick, sticking with things we hate also keeps us from finding the things we love, whether it be a different line of work, a new creative pursuit, or a whole new life.

For many people, quitting (particularly quitting a job) is scary business – after all, the financial risks alone are enough to keep lots of folks plugging away at things they don’t enjoy. But what if the risks are worth it, which multiple studies show that they are? A Gallup poll from this year found that, even in the face of monetary worries, most small business owners say that starting their own business was one of their best decisions, and that they’d do it all over again. And at a time when more and more people are taking chances on self-employment, the resources and information are out there to prove that quitting is not only sometimes the right move, but a more common one than we realize.

How Do You Know If You’re Doing Something That You Love?

Guest Post: What Happened When Natasha Smith Allowed Her Dreams to Evolve

Do You Have the Skillset to Get Out From Underneath Failure?

So You Want To Be A Professional?