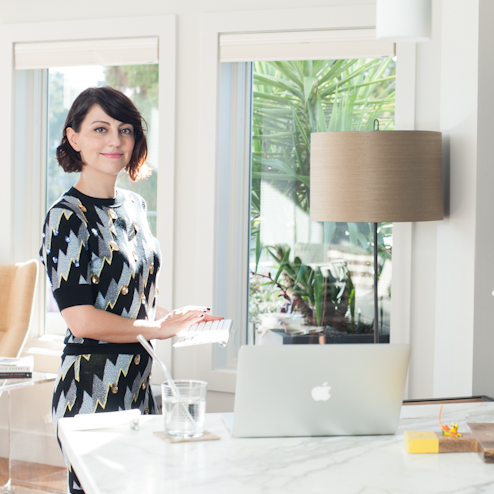 Don’t Set Your Own Career Ceiling

It’s hard not to be blown away by how creatively and deftly Deena Varshavskaya has made her mark in the world. At 16, she moved to the U.S. from Siberia. Instead of giving up on the difficult challenge of catching up to her classmates, a few years later she was studying at Cornell University. Ever the trailblazer, Varshavskaya left college just “two classes short of graduating,” as her LinkedIn profile reads, because she couldn’t wait to engage in the real world. Then in a decade she went from dropout to serial entrepreneur and now founder and CEO of Wanelo (from Want, Need, Love).

Touted as the world’s largest mall curated by people, Wanelo was named Best E-Commerce App by TechCrunch. Varshavskaya herself can claim titles like one of the Most Intriguing Entrepreneurs and Most Creative People in Business, which probably makes for really impressive ice-breaker material. Combined with the fact that she gets away with talking about her Ryan Gosling leggings at conferences while still being taken seriously as a businesswoman… can you say #careergoals?

With all of this success to draw upon, Deena shared with us a few of the lessons she’s learned about crafting a fulfilling career.

POWER IS SOMETHING YOU CLAIM YOURSELF

It’s not always easy to find your place at work while feeling empowered to grow. Here’s how Deena’s tackled this in her career and how she helps her team do the same:

“My goal as a leader is to empower my team to become their greater selves and to fulfill their greatest potential.

“At Wanelo, our team is pretty unique in that it’s the opposite of hierarchical. Everyone has the same potential to contribute to the problems we are solving as a company and grow as individuals in their careers.

“For many who start their careers, there’s often this pressure to blend in as much as possible and not stand out - to be “normal” or “average” because there’s a formula to follow in order to be successful and reach the next level. But I actually don’t believe normal exists because every single person in this world has his or her own quirks. I think it’s important that our team is empowered and unafraid to show these things about themselves and apply it to the work we’re doing.

“I’m very big on encouraging self-expression, and for me, Wanelo has been my space for endless personal growth. My entire life has been about overcoming fears and seeing what I’m capable of, and starting Wanelo was the exact path I needed to express myself.

“I want everyone on my team to find their own path and understand that power is something you claim yourself, not something you are granted. To get there, you should start by declaring really big dreams, then close the gap between what you said you’d do and actually ​doing those things. The smaller the gap between the two, the more powerful you will be.”

SURROUND YOURSELF WITH PEOPLE WHO MAKE YOU FEEL EMPOWERED

A huge part of developing yourself is feeling supported to take risks. If you don’t feel like you have that, Deena advises you seek out those who make you feel empowered:

“To be creative, I believe you need to take risks and make mistakes. Many corporate environments lack creativity because employees operate based on fear, where they’re more likely to focus on pleasing the manager than on solving the problem at hand.

“If you’re a person who wants to take risks and you aren’t getting that support from your career, maybe that job isn’t for you.

“If breaking rules and making mistakes to solve big problems is what motivates you, my advice would be to explore a different career. People often get stuck in jobs doing something that’s “good enough” for too long. Don’t settle for mediocrity!  Find a job that gives you the space to pursue your curiosities and personal goals. It’s important to surround yourself with people who make you feel empowered.”

It’s important to surround yourself with people who make you feel empowered.

DON’T SET AN ARTIFICIAL CEILING FOR YOURSELF

You might already know exactly what direction you want to go in and have big goals for yourself. But when you don’t feel qualified to become that ideal version of yourself, getting started can feel insurmountable. Pause. Read this first:

“The biggest thing is to never set an artificial ceiling for yourself. If you want more growth, don’t hide behind the belief that someone else needs to give you permission to do what you want to do. Your professional ceiling is set by you.

Don’t hide behind the belief that someone else needs to give you permission to do what you want to do.

“It’s also important ​to pursue the things you’re curious about, rather than fixate on practical considerations like money and success. Curiosity is what will allow you to find the kind of work that doesn’t feel like work. ​

“Finding your passion starts with setting really high standards and looking at what is possible in your life. Then it’s about moving forward with your intuition and trying the next big thing to see what fits next.”

Grade A wisdom from a grade A role model.

Photo courtesy Maria del Rio. You can learn more about Deena by following her on Wanelo, Twitter and Instragram at @siberianfruit.

Read more interviews and articles from our South by Southwest coverage here.

3 SXSW Experiences You Can Apply to Your Life

Part One of Our SXSW Recap